More than 120 million Hindu devotees, as well as tourists, are expected to visit the north Indian city of Prayagraj over the next few weeks for the Kumbh Mela, a vast spiritual festival at the point where two sacred rivers, the Ganges and Yamuna, converge.

As the rivers have emptied of monsoon rain in recent months, Indian authorities have swung into action, reclaiming the riverbed and laying the skeleton for a temporary city that at 15 sq miles (39 sq km) is two-thirds the size of Manhattan.

The festival started on Tuesday morning when tens of thousands of Hindu ascetics charged – roaring, naked and ash-smeared – into the water, sanctifying it for the tens of millions of pilgrims who will follow in the coming days and weeks.

Praygraj is said to be one of four sites in India where drops of the essence of immortality were spilled from an urn being fought over by gods and demons. The festival moves between the four locations, with Prayagraj the largest and most lavish. Pilgrims travel from across the country and wait for days for their opportunity to bathe there for a few seconds, including at least 30 million people on the most auspicious day.

“People come here to taste the nectar of immortality,” says Sarabhang Giri, an Australian who was ordained a sadhu, or Hindu saint, in 2004. 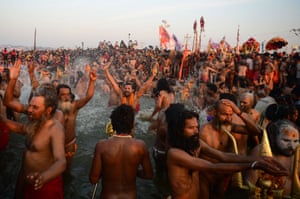