Anyone who’s familiar with the annual Nathan’s Hot Dog Eating Contest knows that 12-time champion Joey Chestnut can scarf down a lot of hotdogs — but what about hamburgers?

It turns out, the 36-year-old California native can pack those away pretty quickly too.

On March 5, Joey uploaded a YouTube video in which he eats 32 McDonald’s Big Macs… in just 38 minutes and 15 seconds.

he attempted to beat the record for most Big Macs devoured in a single sitting, which he knew to be 30.  For the feat, he ordered 32 Big Macs for $127.68, adding a $25 tip for his delivery driver. When they arrived, he stacked each of the boxes neatly on the counter to show just how many there really were — and called the sight both ‘intimidating’ and ‘awesome.’

‘I’m just gonna find my rhythm and enjoy it,’ he said, and with the timer going, got to   work. He finished off the first Big Mac in under 25 seconds, moving on to more and more that he stuffed in his mouth. 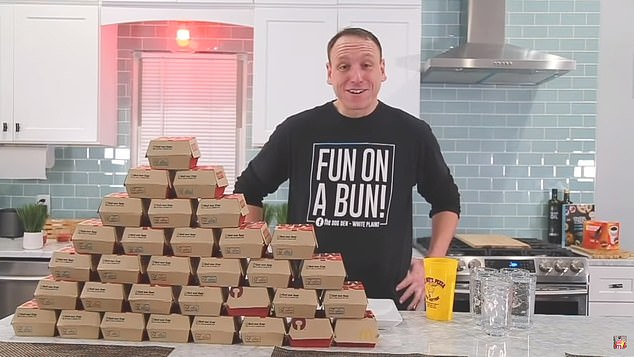