In a deadly variation to the back-garden Mentos and Coke experiment – which is already a dangerously forceful combination – the Youtube scientists decided to switch out the Mentos for highly reactive liquid butane.

The scientists from Thame, England, who call themselves The Slow Mo Guys, set up the experiment in a remote quarry and decked themselves out in protective face masks and lab jackets.  Specialising in taking 4K slow motion videos of fast paced reactions The Slow Mo Guys, Gavin Free (Gav), 31, and Daniel Gruchy (Dan), 31, set up their high resolution cameras just meters from the reaction site, with bin bags placed over the cameras to protect it from the Coca-cola spray.

Dan explained: ‘There’s an interesting science experiment using the interesting properties of butane. ‘Because its boiling point is about 0 degrees Celsius (32F) – its stored as a liquid inside this can and is not super high pressure inside the can.’

When filling the Coke bottle with butane he explains: ‘Because the butane is less dense than coca-cola it will sit on top in a little layer, and it will start boiling then vapour will come out the top’ Adding: ‘When I turn it upside down, what happens is because the butane is pretty much immediately boiled, because its got all the contact with the Coke that is warmer than the butane it causes it to instantly vaporise. ‘This increases the pressure inside the Coke bottle, causing the rapid expansion of gas that escapes out the bottom causing a rocket effect.’ 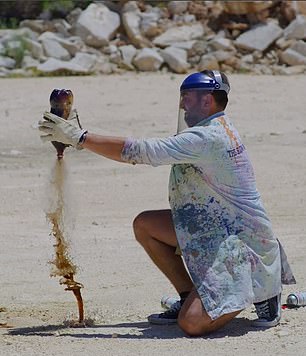