A mother who has given birth to 44 children has been banned from having any more. Mariam Nabatanzi, from Uganda, was married off at the age of 12 and gave birth to her first set of twins a year after that.

Five more sets of twins followed that first, as well as four sets of triplets and five sets of quadruplets. The 39-year-old woman was abandoned by her husband three years ago and has been supporting her surviving 38 children alone.

The family lives in deep poverty. She lives in four cramped houses with her children, in a village surrounded by coffee fields. Doctors have now banned Nabatanzi from having any more children. The mum-of-44 says a doctor told her he had “cut my uterus from inside”. Over the course of the years, doctors found Nabatanzi had unusually large overies. She was advised that birth control pills could lead to health issues in her case.

Nabatanzi has lost six children. Her last child died during childbirth and was part of her sixth set of twins, three years ago. She does whatever job she can do to earn money for her children, including hairdressing, event decorating, selling scrap metal, brewing local gin and selling herbal medicine. 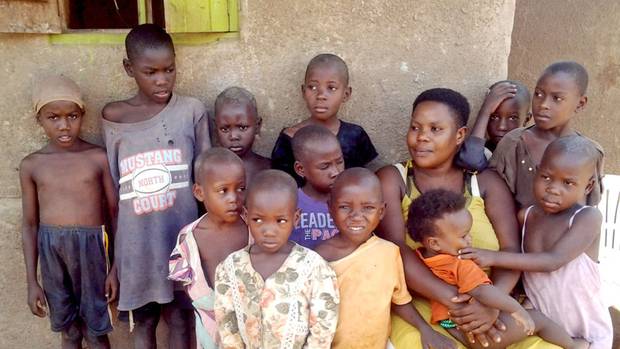