Tyson Foods Inc. is recalling about 11.8 million pounds of frozen, ready-to-eat chicken strips over fears that the products may be contaminated with metal, food safety officials said Saturday. The company is expanding upon a prior recall of more than 69,000 pounds of chicken strips in March, the U.S. Department of Agriculture’s Food Safety and Inspection Service said in a statement. The agency investigated the issue after receiving two consumer complaints of “extraneous material” in Tyson chicken strip products. Tyson expanded the recall after receiving additional complaints of metal fragments found in the chicken. There have been a total of six complaints, three of which alleged oral injury.

“It is unacceptable to Tyson Foods that any product might not meet our standards. Because of these additional consumer reports, we’ve decided to take this precautionary step to make sure that we’re meeting our own expectations and the expectation of consumers,” said Barbara Masters, Tyson’s vice president of regulatory food policy, food and agriculture.

Tyson has released an expanded list of its recalled products, which include not only Tyson products but also Ahold, Kirkwood, Best Choice, Food Lion, Giant Eagle, Great Value, Hannaford, Meijer, Publix and Sparetime. 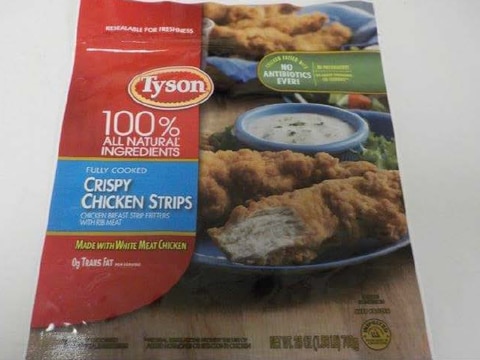