I Don’t Know How But They Found Me is not only a contender for best and longest band name of recent memory, but one of best alternative bands currently out there as well. And it’s no wonder why iDKHOW is making such a stir in the alternative scene either, as the duo is comprised of former long-time Panic! At The Disco bassist Dallon Weekes and the longest-tenured drummer for Falling in Reverse, Ryan Seaman. Together, they make the kind of alternative-minded pop punk that takes the genre back to its golden period with its tongue-in-cheek style of irreverent humor and macabre songwriting. 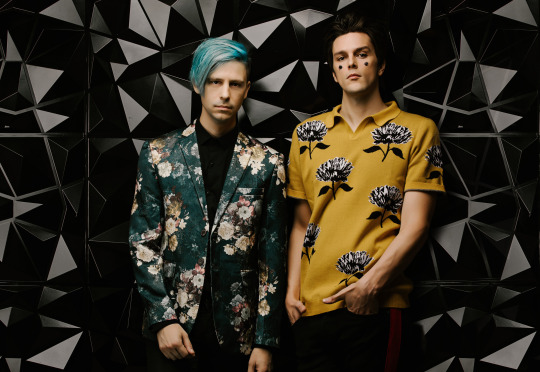 The band has a brand new video for the standout single “Choke.” Featured on the band’s debut EP, 1981 Extended Play, “Choke” is a jubilant and ghastly celebration. Dancing around lyrics like, “I wouldn’t hesitate / To smile while you suffocate” and “So bite your tongue / And choke yourself,” with an unwavering euphoric bliss, iDKHOW somehow manages to channel both the spirit of the Beach Boys and My Chemical Romance in a single, cohesive song. iDKHOW takes their macabre fanfare back to the ‘80s Italo Disco movement for a music video that flourishes on the idea of strange juxtaposition.