Villagers claim that Ringaskiddy’s proximity to the plant and its “love fumes” has been giving local men – and even their canine friends – enormous sexual powers.

Barmaid Debbie O’Grady told the Sunday Times: “One whiff and you’re stiff. We’ve been getting the love fumes for years now for free.”

Ms O’Grady’s mother, Sadie, said that living in Ringaskiddy is a blessing for men who suffer “problems in that department”, adding that there is “something in the air”.

The widow added: “I’m a flirtatious woman, a lot of us are. You just have to have a spark, that’s all. There’s a lovely man waiting down the road for me”.

Pfizer said in a statement that the stiff whiff was nothing more than an “amusing” myth, but there were no hard feelings.

“Our manufacturing processes have always been highly sophisticated as well as highly regulated,” they said.

Nevertheless, residents remain scared stiff that something more sinister is going on.

Psychiatric nurse Fiona Toomey, who recently returned to the village after five years in America, said that local dogs “walk around in a state of sexual excitement”.

“I think that Viagra must have got into the water supply,” she said.

“I’m convinced that’s what happened at the very beginning before they were so closely regulated.” 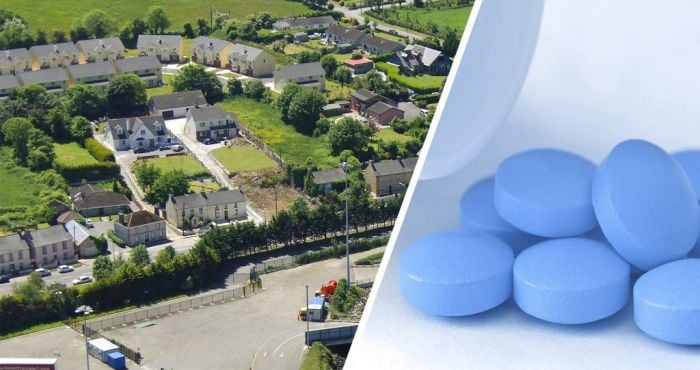