THIS is the shocking moment a huge Russian cargo ship with a “drunk” captain on board smashed into a motorway bridge in South Korea – before trying to dash away.

The 6,000 tonne Seagrand collided with the side of the Gwangan Bridge in Busan as rush hour traffic traveled along the busy highway.

The ship then reportedly attempted to turn and leave the scene but it was followed and stopped by the Korea Coast Guard. Video footage caught the moment the ship left a gaping five-metre wide hole in the lower part of the two-decked bridge.

According to reports from Russia the coastguard questioned the crew on board and discovered the ship’s captain was over the limit. While it is not illegal for a person to down booze on board a merchant ship they cannot be in charge of the controls at the same time. The coastguard said it is not yet clear if the captain had been at the helm when the huge vessel smashed into the bridge. 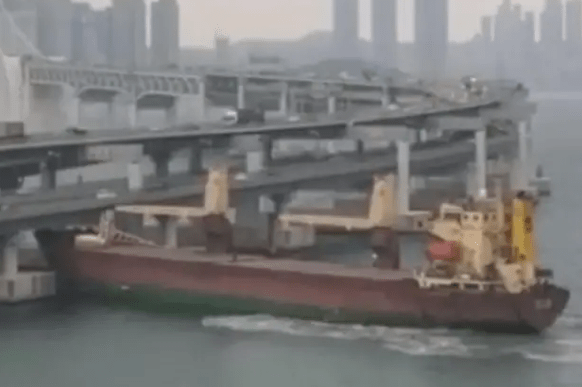