Joao Teixeira de Faria – known as John of God – achieved international fame after being interviewed by Oprah Winfrey and having a list of famous clients, including Bill Clinton.

Two months ago, his world crumbled after police discovered evidence that he was a mass murderer, baby trafficker, and sex slave ringleader. The 77-year-old was arrested a week later in what prosecutors say could be the worst serial crimes case in the country’s history. Faria’s own daughter, Dalva Teixeira, has also spoken out, called him a “monster” and claiming he molested her as a child.

Brazilian activist Sabrina Bittencourt, whose investigations led to Teixeira’s arrest in December, now claims the celebrity medium ran a baby trafficking operation where children were “farmed” in Brazil before being sold to childless couples around the world.

Oprah Winfrey vouched for João’s spiritual healing powers after visiting him in 2010 where she nearly fainted during the “blissful” encounter. Australian reporter Michael Usher recounted a different experience when he visited Faria’s compound for the 60 Minutes programme in 2014. He claims he saw the medium use scalpels to slice open people’s flesh or scrape away at their eyeballs. He added: “John of God is not a surgeon, he is not a trained doctor.

After an arrest warrant was issued for him, Teixeira was on the run for a week, during which time he withdrew £7million from several bank accounts, convincing police he could be planning to flee Brazil, or hide the money in case of compensation claims. Investigators also found firearms and large quantities of cash in a house used by Teixeira as a spiritual retreat. 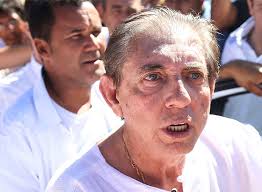