Best Cooking Show in the World

If you like watching cooking shows as I do, you will love this one! It is an Australian cooking show and is the number 1 TV show in Australia, I can see why.

My Kitchen Rules (often abbreviated as MKR) is an Australian competitive cooking game show broadcast on the Seven Network since 2010. Celebrity chefs and co-hosts Pete Evans and Manu Feildel have appeared in every season in the show. They have been responsible for all challenges and judging across the series, with Colin Fassnidge acting as a judge/mentor in the challenge and the elimination house. Each episode focuses on one team’s day of cooking, setting up their instant restaurant and serving a three-course dinner—entrée, main, and dessert—for the judges and their opposing teams. Teams could only start cooking three hours before the other teams and judges arrive at their house. After the team served all three meals to the judges and their opposition, each opposing team must rate the total meal out of ten, then each main judge must rate each of the three courses separately out of ten. The lowest scoring team will be then at risk of elimination.

If you live in the USA, as I do, you can watch reruns of this show on DailyMotion. There have been 10 seasons, the 10th season is being aired right now, so there is plenty of viewing to catch up on. I highly recommend you give this show a chance. Wonderful recipe ideas! FYI, this show is not to be confused with the USA version, which lasted one season as it failed miserably and was terrible to watch. 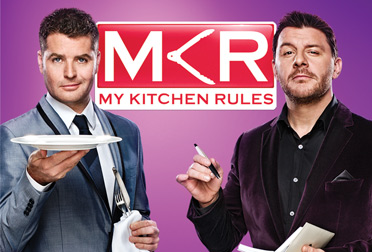