Why do we eat Turkey on Thanksgiving?

Thanksgiving was made an official holiday by President Franklin D. Roosevelt, and it was approved by Congress in 1941.

The tradition of Thanksgivings Day can be traced back to 1621, when the refugees from England, known as Pilgrims, gave thanks for their first successful harvest in Plymouth Rock. They had settled in Plymouth in 1619, but conditions were tough and there was a harsh winter, meaning rations were tight. When spring arrived the Pilgrims were helped by a Native American called Squanto to plant and grow crops. Overjoyed by their newfound skills, they invited the local Native Americans to join them for a massive harvest feast.

Today Thanksgiving Day celebrations revolve around spending time with family and friends. People join around a massive feast and say what they are grateful for. They also attend massive parades, the most famous one being the Macy’s Day Parade in New York City. Turkey has become a staple of the Thanksgiving day feast, along with mashed potatoes, cranberry sauce and pumpkin pie.

There are multiple claims as to why more than 50 million Americans eat turkey on Thanksgiving Day. One of the main theories is that turkey may have been on offer when the Pilgrims hosted the inaugural feast in 1621. Turkeys are native to North America, and would have been an easy choice for the settlers. According to the National Turkey Federation, 90% of Americans eat Turkey on Thanksgiving.

Another Thanksgiving turkey tradition is the pardoning of a turkey, which is done by the US president each year. The turkey becomes the National Thanksgiving bird and is not slaughtered. 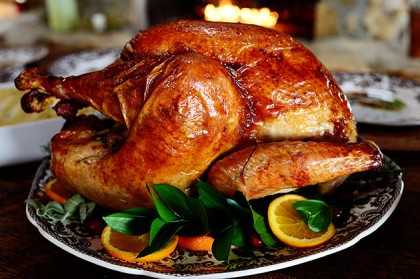