A controversial South African pastor who is at the center of a recent incident in which six of his congregants died after ingesting Jik (bleach) has said what they drunk was the blood of Jesus Christ.

Pastor Ruffus Phala of the Ark Center Ministry has told South Africa’s Daily Sun that he had turned the bleaching agent into the blood of Jesus before administering it to random members of his congregation whom he handpicked.

“Yes, it was Jik before I made the declaration. But after I declared it to be the blood of Jesus Christ, it means it’s no longer Jik so it won’t harm anyone who consumes it,” Pastor Phala was quoted by the Daily Sun.

The man of cloth likened his action to those of Jesus Christ who according to the Bible once gave his disciples wine to drink telling them that it was his blood.

The incident happened about a week ago during a church service where it was reported that the pastor randomly chose 10 people from the congregation before administering the lethal dose. 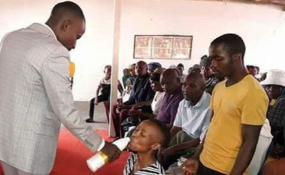