Household Cleaning Products may be Making your Children Fat

Household cleaning products could cause children to become overweight by messing up their gut bacteria, researchers have warned.

Canadian scientists found children who lived in households where disinfectants were used at least once a week had a higher body mass index (BMI) at the age of three compared to children who came in less regular contact with such products. In contrast, children in homes where eco-friendly substances were used were less likely to be overweight.

In the past two decades, more and more households have been using disinfectants, the authors noted, and researchers are working to unpick what this means for children’s health. That includes their gut microbiota—the bacteria which populate the digestive tract—which growing evidence suggests can affect everything from our mental health to our risk of developing heart disease.

Scientists at the Canadian Medical Association Journal studied the gut flora of 757 babies aged between three to four months old who were part of the Canadian Healthy Infant Longitudinal Development (CHILD) cohort. The children’s fecal samples were collected at the start of the study, to reveal the bacteria which lived in their guts. Researchers also asked parents how often cleaning products were used in the home, and visited residences to check. They then reassessed these children at the age of one and three years old, and measured their weight. 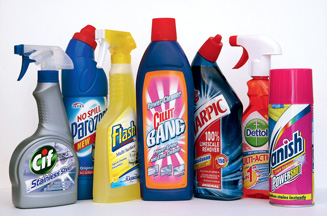