Cristiano Ronaldo moved from Real Madrid to Juventus this summer in a deal worth £89m.  But it has not been a dream start for the 33-year-old as he made a goalless debut for the Old Lady. The forward, who scored more than 300 goals for Real Madrid in nine seasons, then failed to score in his next two Serie A matches. It all changed on Sunday though as footage has emerged of the superstar playing and finding his scoring boots.

In the clip, Juventus have a corner kick against Sassuolo early in the second half.  Defender Leonardo Bonucci kicks an acrobatic effort towards goal that appears to be heading wide. A Sassuolo player then heads the ball onto the post, only for it to bounce back into the penalty box – straight into the path of Ronaldo. The forward sticks his right foot out and puts the ball into an empty net.

And the crowd goes wild as their new signing scores his first goal in 320 minutes of Italian league football. The former Manchester United star finds the net again 15 minutes later, easily slotting the ball past goalkeeper Andrea Consigli. Juventus fans were blown away by the forward and jumped on Twitter to heap praise on him. 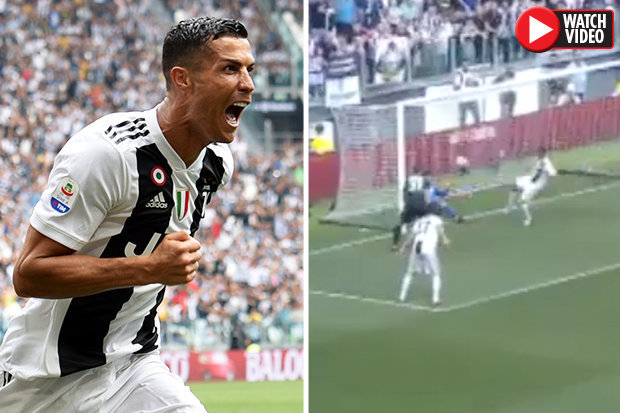