A teenager who lost her boyfriend when he was hit by a car arranged a wedding and funeral on the same day so she could “marry” him and say goodbye. The 19-year-old woman from the Philippines, identified only by her first name, Zyrine, wore a white dress to the wedding. Her boyfriend, Jake Anthony Macadangdang (22), arrived in a white coffin. During the early morning ceremony, Zyrine recited her vows and then put on a wedding ring in the service.

Jake, who’d just graduated from university and was planning to take a job abroad, was killed when a wealthy businessman used his car to ram three motorcycles carrying nine people after a row outside a bar on 24 August.

The alleged attacker, Aaron Christian Reyes, had chased after the three motorcycles and smashed into them, killing Jake and injuring the eight other people. The couple’s families agreed to the wedding and although not legally binding it was sanctioned by the church, who provided a priest. The bride’s father, Antonio Delmend, also took the opportunity to speak of his daughter’s love for Jake. The couple had been together since high school. 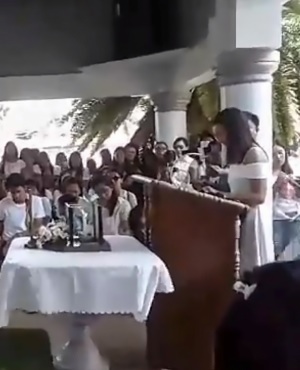