“The little girl reached under the front seat and retrieved a zippered pouch,” police said in a release. “She opened it and held it up so the trooper could see the contents.”

Inside was a bag of marijuana and drug paraphernalia.

Scott Hill, 26, and Megan Karl, 33, were arrested and charged with endangering the welfare of a child, police said. Hill was also charged with possession of marijuana.  The child was taken by Child Protective Services and handed over to relatives. 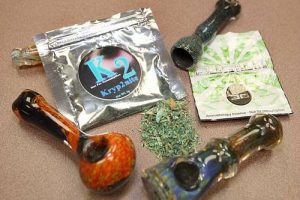