The Great Crypto Crash of 2018 looks more and more like one for the record books.

As virtual currencies plumbed new depths on Wednesday, the MVIS CryptoCompare Digital Assets 10 Index extended its collapse from a January high to 80 percent. The tumble has now surpassed the Nasdaq Composite Index’s 78 percent peak-to-trough decline after the dot-com bubble burst in 2000.

Like their predecessors during the Internet-stock boom almost two decades ago, cryptocurrency investors who bet big on a seemingly revolutionary technology are suffering a painful reality check, particularly those in many secondary tokens, so-called alt-coins.

“It just shows what a massive, speculative bubble the whole crypto thing was — as many of us at the time warned,” said Neil Wilson, chief market analyst in London for Markets.com, a foreign-exchange trading platform. “It’s a very likely a winner takes all market — Bitcoin currently most likely.”

Wednesday’s losses were led by Ether, the second-largest virtual currency. It fell 6 percent to $171.15 at 7:50 a.m. in New York, extending this month’s retreat to 40 percent. Bitcoin was little changed, while the MVIS CryptoCompare index fell 3.8 percent. The value of all virtual currencies tracked by CoinMarketCap.com sank to $187 billion, a 10-month low. 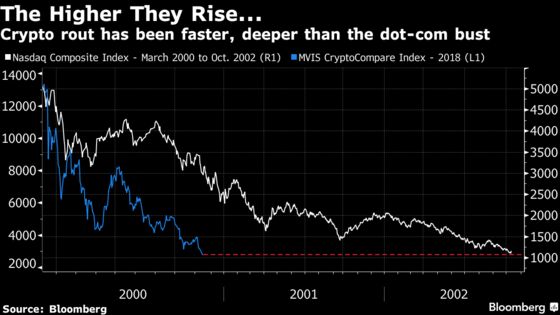