Woman Bitten by Copperhead inside Steakhouse

A simple dinner with family and friends turned in a fiasco for Virginia woman, Rachel Myrick after she was bitten by a venomous snake. Myrick said she was walking into a Fredericksburg Longhorn Steakhouse on Sept. 12 when she felt a sharp pain in her left foot.  She initially thought she’d been stung by a bee or wasp, but when she tried to walk the pain was too much.

Myrick’s boyfriend Michael Clem — who according to Myrick used to breed and handle reptiles about 15 years ago — immediately leapt into action, called 9-1-1 and identified the culprit as an 8-inch-long Copperhead snake. “I am thankful to have had someone there that knew what it was,” Myrick said. “I don’t know one snake from the next and wouldn’t have known how urgent the need for help was, and how to handle the situation.” She was taken to a nearby hospital where her the swelling on her foot has to be marked each time it progressed in order to determine when it was safe to give Myrick the antivenin. 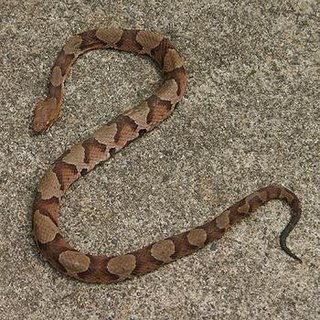