A massive spill of molasses into Honolulu Harbor on Monday is worse than expected. Thousands of fish have been killed and it’s also posing a threat to the public. Crews can’t skim the stuff off the surface like in an oil spill. The molasses is mixed in with the water and there’s no way to get it out. “I’ve been around the oceans my whole life. I’ve never seen it this bad,” boater James Connelly said. The sweet syrup was being loaded onto a Matson ship through a pipeline. But the pipe cracked, dumping 233,000 gallons of it into the water. It’s now spread into Keehi and La Mariana Harbor. “It’s sucking up all the oxygen. There’s no oxygen at depth. The animals that need oxygen and breathe it out of the water are suffocating,” Department of Land and Natural Resources Coral Reef Biologist Dave Gulko said. “Look around the harbor and see fish gasping for air with gaping mouths. It looks bad,” Keehi Lagoon boat owner Clarence Callahan said. On the surface, there’s dead fish. Lots of them. 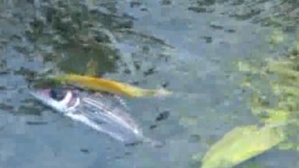